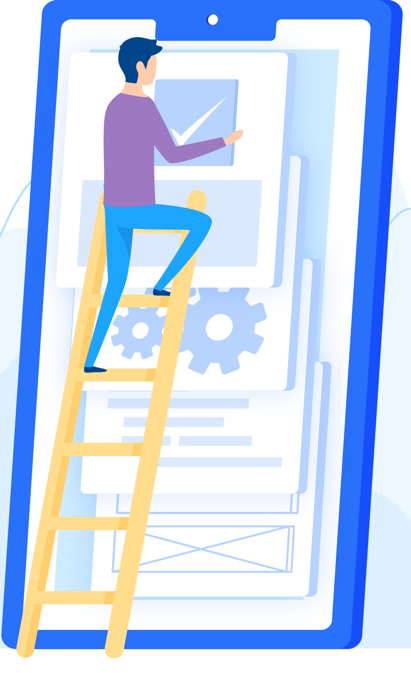 This involves connecting the MicroStrategy Desktop / DWH / MD together. 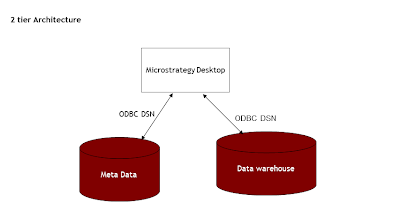 So, if you look at the above picture – it clearly shows about the 2 tier architecture involved in MicroStrategy.
Whatever objects that you create inside the MicroStrategy layer gets stored in their Metadata database. So by default, when you start work/create a project – you would require a metadata database created ( empty shell ) and then start your new project creation on top of it. So this can be done either in 2 tier / 3 tier / n tier based applications. Here we talk about the 2 tier architecture and hence the Metadata database connection needs to be established between your Project Source first ( 2 Tier Project is also called as Direct connection –  which connects directly to the Metadata and DWH ). Then you might need to establish the connection to the DWH / ODS / Datamart required to fetch data for the reports/dashboards/documents that your going to develop with the help of MicroStrategy.
All the connections between the MicroStrategy Desktop –> MD & DWH happens through the ODBC connection.
MicroStrategy Desktop –> Primary Developer interface used to develop the objects required for the reports/dashboards/documents.
3 Tier Architecture
This is the major achievement from MicroStrategy which no other BI application has made it to be as like this sort of functionality coupled with it. Its none other than the MicroStrategy Intelligence server which is treated as the Heart of the MicroStrategy. 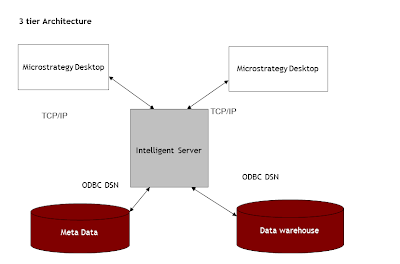 So, the new componet IS ( Intelligence Server ) is added in between your Microstrategy Desktop & MD/DWH. So the MD connection & DWH connections happen through ODBC DSN is first setup with Intelligence Server configurations and then there after you create a project source in your MicroStrategy Desktop configured to connect to IS ( Also called as Server Connection based where as 2 tier is referred as Direct Connection  ). This would be through TCP/IP connections while the db connections are happened through ODBC Connections.
N – Tier Architecture 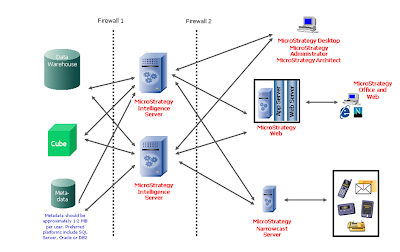 This is the key architecture used by Many clients who are using the MicroStrategy as BI tool. The main purpose of BI is to make better decisions through the RAW DATA that we extract from source and provide the useful informations from it to the end users. The end users should be happy to see the reports on first look and also the quality of data is must to make a better decisions. Here N – tier architecure involves Web Server added to the top of Intelligence Server. Also it will have the NCS ( Narrowcast Server) , Mobile Server attached on top of it. So the intelligence Server communicates to every other component as and when there are request coming from different perspective. It could come from MicroStrategy Desktop or Web based application ( IE/Safari/Chrome/Firefox/etc) or Mobile applications ( iPad/iPhone/Smartphones).
One another thing i would like to highlight here is that NCS is been replaced by Distribution Services to send the alert notification to end users which was previously handled by NCS separately.
Hope it summarizes the architecture and gives you an overview of how MicroStrategy Architecture is!!!

Have a great Day! Enjoy Reading!!