Today lets discuss about the next step after the project creation task is that “Creation of Facts”. So will give an overview of it & give you the buzz words for the same in short.

About Facts
Facts are one of the essential elements within the business data model. They relate numeric data values from the data warehouse to the MicroStrategy reporting environment. Facts generally represent the answers to the business questions on which users want to report.

In the MicroStrategy environment, facts are schema objects created by and shared between MicroStrategy users. The facts you create in MicroStrategy allow users to access data stored in the data warehouse. Facts form the basis for metrics, which are used in the majority of analyses and reports that users can create with MicroStrategy.

Facts are stored in the data warehouse in fact tables. These fact tables are composed of different columns. Each cell in the columns represents a specific piece of information. When fact information is requested for a report in MicroStrategy, that column is accessed to retrieve the necessary data. This data is used to create a metric (such as profit) which is a business measure.

So i would say in short as the “Key Measures/KPIs” that is seen in the fact tables are called as Facts which in turn will be used in Public Objects –> Metric creations.

Like other schema objects such as attributes, facts are logical MicroStrategy objects that correspond to physical columns and tables. As i said earlier, whatever the objects that you create inside MicroStrategy are Logical objects & not the one which holds data in it…. It will be acting as a logical object & when using them in report generations –> it hit the WH/Cache/Cube & retrieve you the desired results. ( MicroStrategy Engine helps to do the same — that was said earlier & I guess now, everyone might be aware of the MicroStrategy engine process & report execution process involved in MicroStrategy ).

A fact has two common characteristics: it is numeric and it is aggregatable. Examples of facts include sales dollars, units sold, profit, and cost.

It is important to understand how to define facts because facts are the basis for almost all metrics. Facts also allow you to create advanced metrics containing data that is not stored in the warehouse but can be derived by extending facts.

Different ways to create facts & are as follows :

During your initial project design effort(which i said in previous sections with detailed screenshots), you can create multiple simple facts using the Project Creation Assistant, the Fact Creation Wizard, and Architect. However, fact creation and modification can be done throughout the entire life cycle of a project. Facts can be created and modified using various techniques, utilizing the following MicroStrategy tools:

– The Fact Creation Wizard is a step-by-step interface that is typically used when you first create a project. It allows you to create multiple facts in a single creation process. This you might have seen in the Project Creation Assistant itself & You can even access them from the Desktop –> Schema Menu available in the Menu Bar also.

– The Fact Editor, which is discussed in Creating and modifying simple and advanced facts, is used to add advanced features to facts that already exist or to create new simple or advanced facts as your project evolves.

Here, Fact Creation Wizard is only used to create multiple facts quickly… Which had been discussed already so skipping to the next section.

Few general information for your understandings :

After you have created a project, you can use either the Fact Creation Wizard, the Fact Editor, or Architect to create and modify facts in your project:
–> With Architect you can:
– Create simple facts
– Create multiple facts quickly
– Add a large number of facts during project creation
– Create simple and advanced facts
– Edit existing facts and configure additional schema-level settings

With Architect, you can support all of the simple and advanced fact features that are available in the Fact Editor. Rather than focusing on one fact at a time with the Fact Editor, you can use Architect to create and modify multiple facts for a project at one time. Generally Architect is a component that the MicroStrategy Architect can use it to review & modify if any of the schema objects with the help of it. This is a good interface to work with schema objects & requires enough knowledge about it before using it.

–> With the Fact Creation Wizard you can:
– Create simple facts
– Create multiple facts quickly
– Add a large number of facts during project creation

The Fact Creation Wizard can create multiple facts quickly and easily. However, it limits you to creating simple facts and does not allow you to edit existing facts. Typically, you only use the Fact Creation Wizard as part of the initial project creation, for creating most of the facts for the project. Generally Wizard always helps us to create the facts quicker & mostly the simple & direct fact columns from the fact table. This is seen during the initial phase of the project creation as said earlier.

–> With the Fact Editor you can:
– Create simple and advanced facts
– Edit existing facts and configure additional schema-level settings

You can use the Fact Editor to edit existing facts and create fact expressions, column aliases, level extensions; map multiple or heterogeneous columns; and configure other settings. The Fact Editor allows you to modify one fact at a time, which can be helpful when only a few facts in a project need to be modified.

The Structure of Facts:

Facts are made up of the following components, 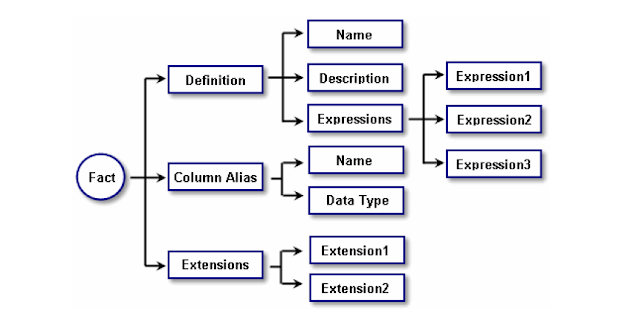 The above shown components are buzz words that are used in Facts…
Will talk about each of it in coming posts…
Have a good day!!