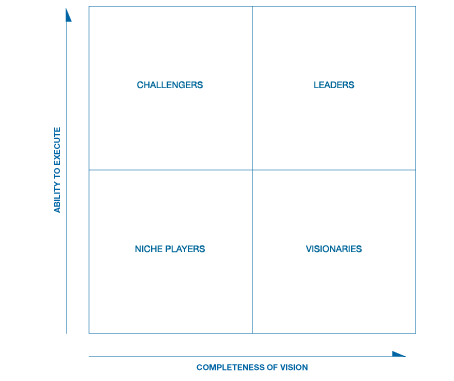 Based on the above 4 criteria or sections, they positions the technology players within the specific market.

How do I use a Gartner Magic Quadrant?

Use a Gartner Magic Quadrant as a first step to understanding the technology providers you might consider for a specific investment opportunity.
Keep in mind that focusing on the leaders’ quadrant isn’t always the best course of action. There are good reasons to consider market challengers. And a niche player may support your needs better than a market leader. It all depends on how the provider aligns with your business goals.

How does a Gartner Magic Quadrant Work?

A Magic Quadrant provides a graphical competitive positioning of four types of technology providers, in markets where growth is high and provider differentiation is distinct:
Leaders execute well against their current vision and are well positioned for tomorrow.
Visionaries understand where the market is going or have a vision for changing market rules, but do not yet execute well.
Niche Players focus successfully on a small segment, or are unfocused and do not out-innovate or outperform others.
Challengers execute well today or may dominate a large segment, but do not demonstrate an understanding of market direction.

Now, i believe everyone would be aware of the Gartner way of rating the technologies playing in the current market. Out of these 4 sections, MicroStrategy is always in the LEADERS quadrant for quite a few years continuously. Below is the information’s (Strengths & Cautions) that Gartner Analysis says for MicroStrategy in 2014. 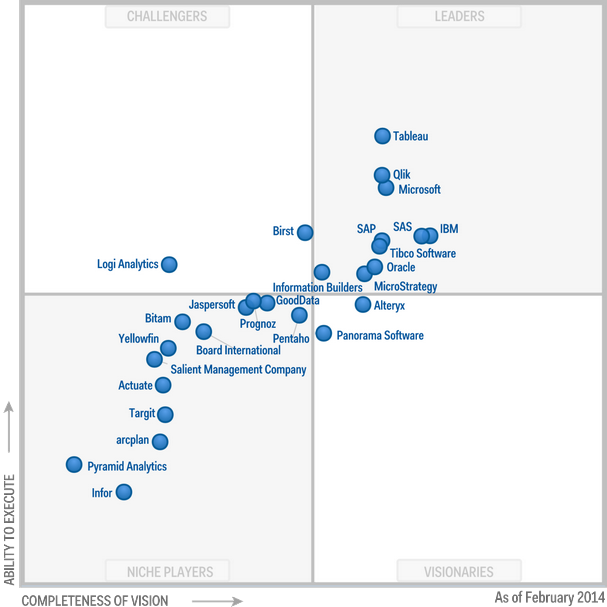 MicroStrategy offers an enterprise-grade and organically grown end-to-end BI platform that is well suited to large and complex requirements.

Hope it helps for my bloggers to gain about how MicroStrategy competes with their competitors in current world. To know more about Gartner report analysis for other BI vendors, please refer below the links.
Have a Good Day!
Reference:
About Gartner
About Gartner 2014 BI & Analytic Reports